Back to the Future with André Courrèges 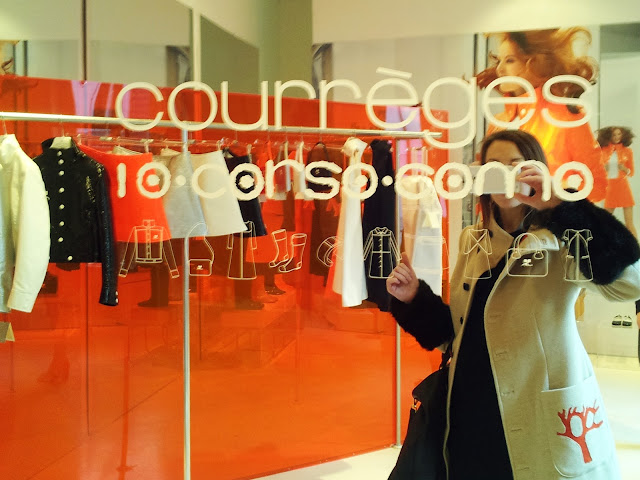 'Where do his tennis dresses, his sailor dresses come from? Where did he find them? On the steps of Delphi. In the wardrobe of Electra. They are modern and they are antique.'


I am still fascinated by what I saw on the exhibition in Corso Como, Milan during fashion week. Famous works of Andre Courreges are alive again and actually can be bought just as easily as other clothes in the Corso Como store.
It is always interesting to observe and realize how had people seen our nearest future, especially when it is already has become present.
Andre Courreges is one of the designers whose name is written behind "Space Age". His artwork still remains conceptual and never gets old.

Realizing the craziness of lacquered neon orange leather used in the mid of 60's is hard.. This collection has been relaunched this year and now available to everyone who is mad about retro-futurism.

"Andre Courreges was born in Pau, in the Basque country of France in 1923. Although he studied and became a civil engineer, he was always interested in architecture and textil design. He found work designing footwear and men’s clothing for a tailor, while occupying himself with Rugby and Mountain climbing. From 1941-1945 Courreges was a pilot in the Air Force in World War II."

"In 1968 Courreges hit the headlines with his SPACE AGE collection. His clothes at this time, were functional, uncluttered, futuristic designs. He was fascinated by metal and put his models into metal brassieres and bustiers. Andy Warhol said "Courreges clothes are so beautiful, everyone should look the same, dressed in silver. Silver merges into everything, costumes should be worn during the day with lots of make-up." Courreges' clothes were sharp, angular and subject to a highly disciplined design. Simple, stark, trapeze-shape dresses and coats were boldly piped in contrasting colours."

"Courrèges' fashion shows were organised by his wife. These were lively presentations featuring athletic, partially nude models. Courrèges became interested in shorter skirts at the same time as Mary Quant was designing them and there has been some controversy over who 'invented' the miniskirt. He also promoted trousers for women. At the time, these were worn only on informal occasions, but Courrèges introduced slim, tapering trousers for everyday and smart wear.

I am in love with them

Courrèges wanted to produce affordable clothes. From 1965 he spent two years raising funds to make his clothing more accessible. However, his next collection was criticised for reproducing the same styles. Like the majority of big name couturiers, Courrèges now sells accessories, luggage and perfume in addition to his clothing ranges."